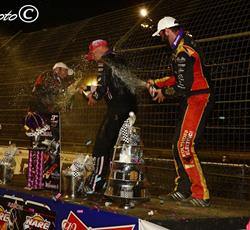 Hanford, CA – October 6, 2010…As the Northern California sprint car season reaches its final month the annual Cotton Classic is fast approaching and is set for Saturday October 16 at Giant Chevrolet Kings Speedway in Hanford. The night of racing will feature two divisions in competition, including the Winged 410 Sprint Cars and USAC West Coast 360 Sprints.

The Winged 410 Sprint Car portion of the night will feature an inflated purse paying $5,000-to-win and $500-to-start the A-main. This will mark the first time since 2008 that Winged Sprints have been a part of the Cotton Classic, with Chico’s Stephen Allard being the most recent 410 Sprint Car winner of the event.

The Cotton Classic will not be a King of the West Sprint Car sanctioned event, but we are enthusiastically supporting the show and ask all teams and fans to do the same. It will be an event that is very important in the overall success of Winged 410 Sprint Car racing and Giant Chevrolet Kings Speedway. In 2011 we are hopeful that the Cotton Classic will be a part of the event schedule for the series.

So far this season there have been two Winged 410 Sprint Car events held at the track, both of which were claimed by San Jose’s Tim Kaeding, who was also the champion of the Cotton Classic in 2002. In total T. Kaeding has won 12 main events in California this season while driving the Central Valley based Roth Motorsports, DTR Transport Inc. No. 83 sprinter.

Teams will be allowed to run either Hoosier or Goodyear tires at the Cotton Classic. Hoosier tire rules will be according to the 2010 Golden State Challenge rulebook and allowed Goodyear tires will include the 100, 200 and 300.

The front gate will open at 5:30pm on Saturday October 16 with racing scheduled to start around 6:30. General admission bleacher tickets will cost $17 and Reserved Grandstand tickets $20. For advance tickets and more info contact 559-584-7223.

A drivers based fund raiser for Breast Cancer Awareness will be held at the event and a portion of each pit pass and ticket will also go to support Breast Cancer and the American Cancer Society. Camping is available on site and overnight camping will be allowed in the pits for free.

The Giant Chevrolet Kings Speedway is a lightning fast 3/8 mile clay oval and is located on the Kings County Fairgrounds in Hanford, California.