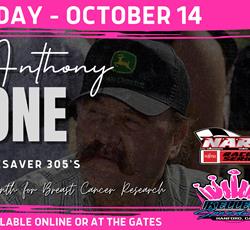 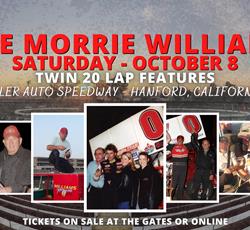 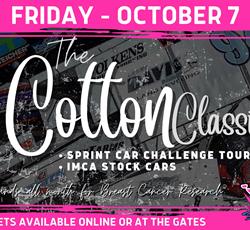 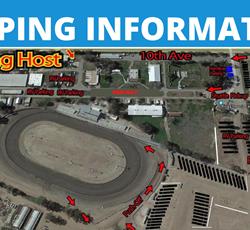 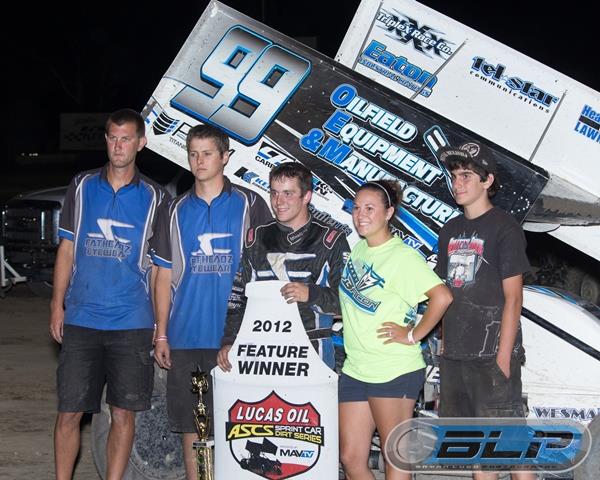 “I got really fortunate in that race” commented Bacon on the front straight. “We were having a fuel issue especially those last ten laps after those restarts. It was just spurting and spitting so I was just hoping and trying not to slip off the bottom and hold on to the end of the race.”

Starting the race from the front row, Bacon would settle for the runner up spot early on as Wayne Johnson took off from the pole. Slowing for a caution for Gary Wright with twenty-nine laps to run, Bacon would keep pace with the City Vending No. 77x as the field rolled back to life.

Moving into slower traffic by lap seven, Bacon would fully commit to the inside groove as Wayne Johnson began having to search for lines around slower cars. Putting back markers amongst the leaders, the fight for the top five would tighten up as Jason Johnson ran third with Jason Myers and Kyle Hirst in a continuing battle for fourth and fifth.

Getting the run as the field raced to the halfway point in the night’s thirty lap affair, the Fatheadz Eyewear No.99 would see his persistence pay off with the pass for the race lead. Falling back to second, Johnson would begin to fall in the line-up; slipping back to fifth before nearly getting upside down.

Forcing the caution with ten laps to run, Johnson would return to the race after a visit to the work area.

Restarting for the final ten laps, the cautions would continue with the yellow lights coming back on for the stalled Shawn Wright with twenty-two laps complete then again on lap twenty five when Mike Faria and Tommy Tarlton both came to a stop at opposite ends of the track.

Green for the final five laps, the battle in the top three would get dicey as Jason Johnson and Jason Myers each had broken front wings. Running second on the restart, the AccuDoc Solutions No. 41 would finally see the Corporate American Lending No. 21m of Myers able to muscle by with two laps remaining.

Despite a flat front wing and an almost ten car length disadvantage, the Clovis, California racer was on a mission with the white flag waving. Pulling within two car lengths exiting turn two for the final time, Myers would roll even with Bacon in turns three and four but it would be Brady Bacon holding on to the west coast win.

Jason Myers and Jason Johnson would complete the podium with Kyle Hirst and tenth starting Brad Loyet rounding out the top five.

Earning the PitstopUSA.com Hard Charge of the night, Jason Statler climbed from twentieth to sixth with Dustin Morgan charging from thirteenth to seventh. Seth Bergman would come from fifteenth to eighth with Steven Tiner and Craig Stidham finishing out the top ten.