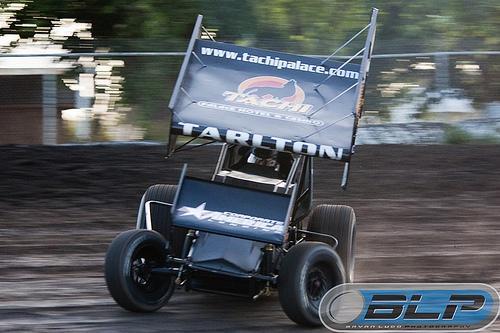 Hanford, CA – Tulare, CA – (May 21-22, 2010) --- “I have to charge harder” were the words that were muttered by a dejected Tommy Tarlton following his weekend of Sprint Car Racing at the Giant Chevrolet Speedway in Hanford, CA and at the Groppetti Automotive Thunderbowl Raceway in Tulare, CA. But those who witnessed Tarlton wheel the potent Corporate America Lending, Tarlton & Son, Inc. No. 21 would probably disagree with his interpretation.

The warrior from Easton drove the wheels off of the Maxim every time that the car hit the speedway. It didn’t matter if it was during the first lap of hot laps or if it was the final lap in a 30-lap main event, Tarlton was on kill.

Friday night at Giant Chevrolet Speedway, Tarlton showed once again that he was going to be someone to contend with Golden State Challenge Sprint Car Series (GSC) competition on this evening after he circled the 3/8-mile speedway at 13.030 seconds. His time was good enough for second quick-time of the night. Tommy finished fourth in his heat race and seventh in the dash.

Tarlton would start out of the seventh position in the talent filled 30-lap feature event. When the green flag dropped, Tarlton immediately began making moves while trying to find the fastest way around the speedway. Tarlton kept himself out of trouble and eventually found his way into third place, where he would solidly keep himself for the remainder of the race.

In six GSC starts, Tarlton’s stats have been impressive to say the very least. He has scored; 1 win, 1 second, 3 third place finishes, and 1 fifth place finish.

The Taco Bravo Series would make a lone visit to the always exciting Thunderbowl Raceway. Tarlton Motorsports showed that they don’t just have their 410 program hitting on all eight cylinders, but they also have their 360 program dialed in. Tommy would apply the Shark power that lay beneath the hood in qualifying, carrying him to quick-time of the night turning 13.816 seconds around the speedway.

Tommy went on to record second in his heat race and had a prime front-row starting spot for the 30-lap feature, with Tim Kaeding to his outside after the zero pill was drawn. When the field went green, the show that Tarlton and Kaeding put on was worth the price of admission alone. The two drivers began swapping positions and brought the fans to their feet as they diced with one another throughout the exciting race. Kyle Larson and Brent Kaeding would also join the fray. In the waning laps of the race, Tarlton would drop to fourth, where he would finish and also remain the Taco Bravo Series’ point’s leader. “It’s a great feeling to be able to consistently run in the Top-5. I know that we can even get better than where we’re running now,” said Tarlton.

“Tommy T” will take this weekend off before returning to racing action at the Ocean Speedway on Friday June 4.

Be sure to catch “Team Tarlton” on Facebook! For schedule information, please visit www.tarltonandson.com